India enjoys an important position in the global pharmaceuticals sector. The country also has a large pool of scientists and engineers who have the potential to steer the industry ahead to an even higher level. Presently over 80 per cent of the antiretroviral drugs used globally to combat AIDS (Acquired Immune Deficiency Syndrome) are supplied by Indian pharmaceutical firms.

Indian companies received 304 Abbreviated New Drug Application (ANDA) approvals from the US Food and Drug Administration (USFDA) in 2017. The country accounts for around 30 per cent (by volume) and about 10 per cent (value) in the US$ 70-80 billion US generics market.

India's biotechnology industry comprising bio-pharmaceuticals, bio-services, bio-agriculture, bio-industry and bioinformatics is expected grow at an average growth rate of around 30 per cent a year and reach US$ 100 billion by 2025.

The Union Cabinet has given its nod for the amendment of the existing Foreign Direct Investment (FDI) policy in the pharmaceutical sector in order to allow FDI up to 100 per cent under the automatic route for manufacturing of medical devices subject to certain conditions.

The drugs and pharmaceuticals sector attracted cumulative FDI inflows worth US$ 15.98 billion between April 2000 and March 2019, according to data released by the Department of Industrial Policy and Promotion (DIPP).

Some of the recent developments/investments in the Indian pharmaceutical sector are as follows:

Some of the initiatives taken by the government to promote the pharmaceutical sector in India are as follows:

Medicine spending in India is projected to grow 9-12 per cent over the next five years, leading India to become one of the top 10 countries in terms of medicine spending.

Going forward, better growth in domestic sales would also depend on the ability of companies to align their product portfolio towards chronic therapies for diseases such as such as cardiovascular, anti-diabetes, anti-depressants and anti-cancers that are on the rise.

The Indian government has taken many steps to reduce costs and bring down healthcare expenses. Speedy introduction of generic drugs into the market has remained in focus and is expected to benefit the Indian pharmaceutical companies. In addition, the thrust on rural health programmes, lifesaving drugs and preventive vaccines also augurs well for the pharmaceutical companies. 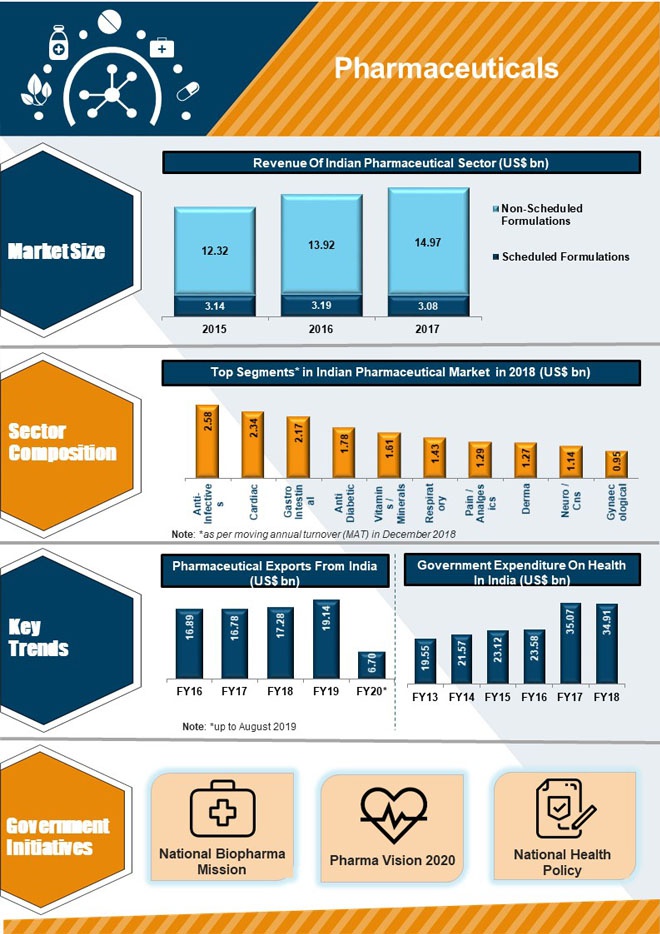 Indian drugs are exported to more than 200 countries in the world, with the US as the key market. Generic drugs account for 20 per cent of global exports in terms of volume, making the country the largest provider of generic medicines globally and expected to expand even further in coming years. Pharmaceutical exports from India, which include bulk drugs, intermediates, drug formulations, biologicals, Ayush & herbal products and surgicals reached US$ 19.14 billion in FY19 and US$ 5.17 billion in FY20 (up to August 2019). The exports are expected to reach US$ 20 billion by 2020. In FY18, 31 per cent of these exports from India went to the US. Healthcare sector witnessed private equity investment of US$ 1.1 billion with 27 deals in first half of 2019.

The ‘Pharma Vision 2020’ by the government’s Department of Pharmaceuticals aims to make India a major hub for end-to-end drug discovery. The sector has received cumulative FDI worth US$ 16.25 billion between April 2000 and June 2019. Under Budget 2019-20, total allocation to the Ministry of Health and Family Welfare is Rs 62,599 crore (US$ 8.96 billion). Rs 6,400 crore (US$ 915 million) has been allocated to health insurance scheme Ayushman Bharat- Pradhan Mantri Jan Arogya Yojana (AB-PMJAY). As per Union Budget 2019-20, Rs 1,900 crore (US$ 0.27 billion) have been set aside for research of the total amount and Rs 62,659 crore (US$ 8.96 billion) allocated for Ministry of Health and Family Welfare.